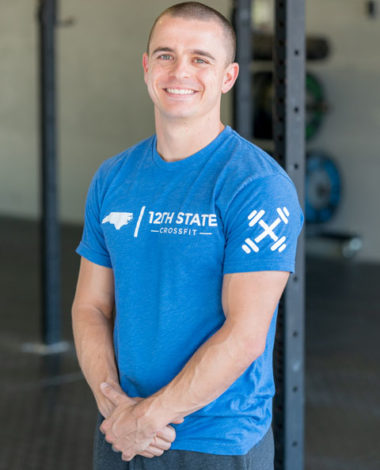 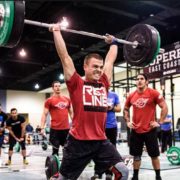 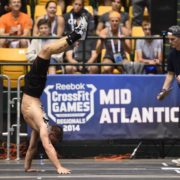 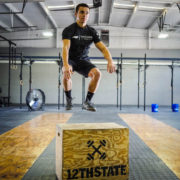 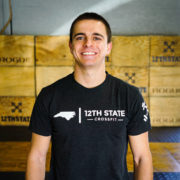 Cliff is a native of North Carolina and a graduate of NC State, right here in Raleigh.  He earned a bachelor’s degree in Sport Management and Sport Science in 2013 before opening 12th State CrossFit in 2014.  As head coach, Cliff is responsible for overseeing all athletic programs at the gym and is your best contact for all things 12th State as he manages our day to day operations.

Cliff enjoys coming to work every day and helping 12th State athletes to better themselves through regular, disciplined training in a fun and relaxed atmosphere.  His love of research and teaching allows him to develop unique and challenging programming to fit the needs of his clients. He has a special interest in Olympic Lifting and previously completed additional training through the Pendlay Level 1 and Level 2 Seminars. Cliff enjoys working with all types of athletes, from the beginner to the elite, and is known for his calm nature and ability to put people at ease. He also has a soft spot for children and is a coach with the CrossFit Kids program as well.

Prior to his CrossFit coaching career which began in 2012, Cliff was a competitive gymnast and a 2 sport Division 1 college athlete.  As a gymnast, he competed in the National Championships three times, including one individual National Championship to his name.  For Cliff, the transition to CrossFit competitive athlete was a natural one. In 2014, he advanced to the CrossFit Mid-Atlantic Regionals where he turned in Top 10 finishes in 4 out of the 6 events he competed in, including an Event 2 CrossFit Regional World Record 410’ handstand walk.

On a personal note, Cliff married his best friend, Hannah, in August 2014. He freely admits that he got the better end of the deal, but is thankful that she said yes.  Cliff and Hannah have enjoyed building 12th State into what it is today, and are looking forward to helping the people of Raleigh become fitter for years to come.

Individualized Programming:  Many athletes have specific goals that fall outside of general CrossFit programming.  Coach Cliff can help, whether your goal is strength training, weight loss / body composition, sport performance, endurance, or other needs.  Please send Cliff a note at Cliff@12thstatecrossfit.com to set up a meeting and inquire about rates.

Personal Training:  Cliff offers personal training services to both members and non-members of 12th State CrossFit.  His most common clients are those interested in general fitness as well as CrossFit athletes looking to improve their gymnastics and / or weightlifting skills.  Specifically, Cliff is well known for his excellence with movements such as the handstand walk, muscle-up, chest to bar pull-up, and pistol.  Schedule a time to work on your advanced gymnastics movements with Cliff, and learn from the best at 12th State CrossFit.

Interested in a private training session with Cliff Kohut?