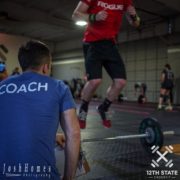 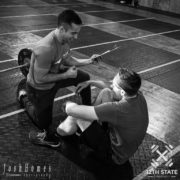 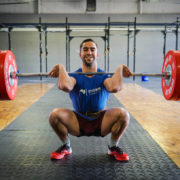 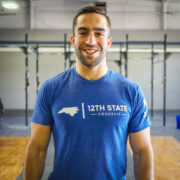 Mike was born in the Bronx, New York and spent most of his childhood in Puerto Rico.  The 2nd of 5 boys in his family, he grew up in a competitive environment and has an extensive background in the sport of wrestling.  He moved to Fayetteville, NC in 2001 before eventually landing in the triangle a few years later. Mike attended UNC Chapel Hill before transferring to NC State University where he graduated with degrees in Political Science and History.   He now proudly calls Raleigh his home.  In addition to his love of coaching and fitness, Mike and his wife Elise are the owners of Woof Gang Bakery in Raleigh & Cary.

It is apparent that Mike loves what he does, as he can be found in the gym more than just about anyone else at 12th State.  Personally, he enjoys squatting heavy, fine tuning his olympic lifting technique, and working his weaknesses.  He is always available to help our members, and gets great satisfaction out of seeing athletes reach their goals.  Mike is committed to educating himself so that he can bring his clients the best coaching possible, and has earned CrossFit Level 2 Trainer status.

As director of Olympic Lifting, Mike is responsible for shaping the curriculum of the 12th State barbell course.  He has additional training as a Sports Performance Coach with USA Weightlifting.  His focus on technique and movement standards is apparent in the classes he leads.

Personal Training:  Mike offers personal training services to both members and non-members of 12th State CrossFit.  His most common clients are those interested in general fitness as well as CrossFit athletes looking to improve their weightlifting skills.  If interested, please email info@12thstatecrossfit.com to schedule a time.

Interested in a private training session with Mike Morales?