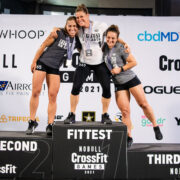 Whitney, a native of Florida, first came to North Carolina to attend the University of North Carolina and represent the Tar Heels as a member of the varsity softball team. After graduating with a degree in exercise science and psychology, Whitney followed her passion for coaching to Greensboro College, where she took her first position at the collegiate level in the fall of 2007. Working as the assistant softball coach and strength and conditioning coach, Whitney trained athletes across several different sports until taking over head softball coaching duties exclusively in 2009. Although she enjoyed coaching softball, she eventually returned to CrossFit and her roots in strength and conditioning after the 2014 season.

Always having a passion for fitness, Whitney fit right in with the CrossFit community when she started in January of 2013. Because of her extensive background in strength and conditioning, she found success quickly in the sport, qualifying for regionals multiple times ( team – 2013,14 and individual – 2015,16,17,18). She also had the opportunity to qualify and compete in the CrossFit games three times (2015, 17, 18), an honor reserved only for a very small number of truly exceptional athletes.  Most recently, Whitney was named world champion at the 2021 NoBull CrossFit Games Masters Competition (age 35-39).

Whitney came to 12th State Crossfit in 2017 from Boston, MA where she worked and trained at Crossfit New England. She has had the opportunity to train with some of the top athletes and coaches in the Crossfit community including Ben Bergeron and 2x CrossFit Games Champion Katrin Davidsdottir. Prior to coaching at Crossfit New England, Whitney served as the Head CrossFit Coach at College Hill Crossfit in Greensboro, NC.

While Whitney admits that it has been an honor to be able to compete at a high level, she enjoys the coaching aspect of CrossFit even more. Whitney believes that participating in CrossFit offers the opportunity to be part of something larger than yourself. She relishes the opportunity to help athletes reach their physical, mental and emotional life goals. She believes that her fundamental task is to see continual growth in each athlete that she coaches.

Whitney is the heart and soul of 12th State CrossFit, knows everybody by name, and genuinely cares for each and every one of our members.  We are proud to have her represent 12th State and hope that you get a chance to know her.

Interested in a private training session with Whitney Gelin?